[EN] Welcome to the jungle of academic committees

Welcome to the jungle of academic committees: A guide

This leaflet is designed to provide information about the academic committees at the University of Heidelberg. The members of these committees take part in decision-making that affects the whole university. Information about student committees like the Fachschaftsrat or the Studierendenrat are to be found on separate leaflets. 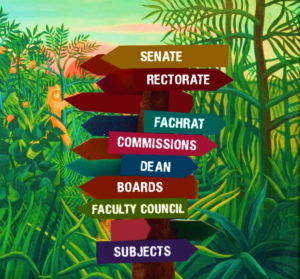 As a rule, university committees comprise members of all four status groups, hence the usage of the term group university. Members of the university can be divided into four groups:

The Federal Constitutional Court decided in 1972 that the univer-sity teachers make up the majority in the university committees. That’s why the other groups often do not have much to say. It is therefore not only due to the amount of documents that there are rather few extensive discussions in board meetings

Subject and faculty – Seminar and Institut

The subjects are the smallest units of the university. They are arranged as Seminare or Institute. (Using two different terms might suggest a major division. In fact, there is only a negligible difference in their organisational form. To simplify further explanations, we will mostly use the term institute). Institutes can be responsible for both whole subjects (such as study of English) or sub-subjects (such as “criminal law”).

Faculties are unions of various institutes. The University of Heidelberg consists of twelve of those faculties. Some of the faculties offer only one subject to major in, the Faculty of Law being one of them. Many faculties, like the Faculty of Modern Languages, combine various majors.

Committees at the institutes

In most cases, institutes are led by a Board of Directors (Direktorium) where only professors are entitled to vote. There are some cases where they include advisory members from other groups. It is also possible that they consist of a single person working as a director.

If major and subject merge or if a faculty houses only a few sub-jects (see below), subject-specific topics such as lecture program-mes, regulations for the conduct of examinations, academic festi-vities or library opening times will be directly discussed at those faculties.

Bigger faculties like the Faculty of Modern Languages or the Faculty Of Behavioural and Cultural Studies discuss these subjects in special councils called Fachräte. Findings of these discussions are either being passed on to the responsible committees or directly translated into practice by the subjects themselves. 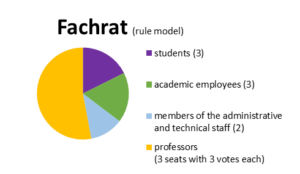 Committees on the faculty level

The faculty is led by the Board of the Faculty (Dekanat). Its mem-bers decide on the teaching subjects and supervise the institutions.
Furthermore, it acts as a treasurer for the spending of their me-ans. Bigger faculties discuss these matters first at the level of their respective institutions. 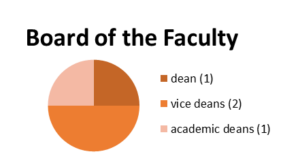 The faculty’s advisory board is either the big or the small version of the Faculty Council. It discusses the creation/closing of majors, the appointment of professors and the range of courses. Most findings of these discussions have to be approved by the Senate of the University of Heidelberg (see below). 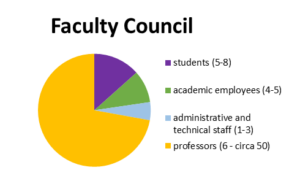 Committees on the university level

The university is led by the Rectorate. It represents the university externally and coordinates the internal cooperation.

The Senate is the deciding committee above the faculties and holds its meetings chaired by the rector. It is tasked with recommending the appointments of professors, decides either the creation or abolition of majors and decides/discusses the major’s rules and examinations. 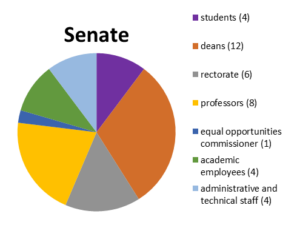 Most of the decisions of the Senate require further approvals, e.g., by the Rectorate, the University Council or the Ministry of Science. The work is partly prepared in Senate Committees.

The university committees are not the only ones of importance. The ones of Studierendenwerk Heidelberg (StuWe, a state-run non-profit organization for student affairs ) also hold significance. The representatives’ assembly (or Vertreterversammlung) answers general questions and elects the administrative board. This board is responsible for advising and keeping a watch on the management of the StuWe.

Besides, there are various commitees which are for the most part run by the students or doctoral candidates themselves – the Verfasste Studierendenschaft (including the Fachschaftsräte, the Studierendenrat (Students‘ Council) and the Referatekonferenz) as well as the Doktorandenkonvent (Doctoral Students Convention). You will find more information about them on other leaflets.

Moreover, on the university level exist various advisory councils such as the University Council and Senate Committees. You can find detailed information about all of them (as well as all the bodies presented in this leaflet) at www.stura.uni-heidelberg.de/gremienarbeit. There you can also find an organizational chart.

All the information presented above is obtained from this leaflet.